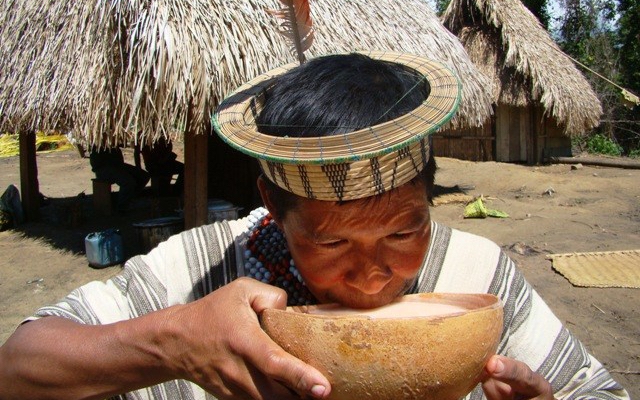 I press my face against the warm Plexiglas window and watch the potato salad fall to the jungle below. Charles has just pushed the container through the window vent of our plane. This is a small plane and a small container, and we have risen only a few hundred feet above the coastal rainforest.

The pilot glances out his side window, then at the controls. He hasn’t seen the potato salad hurtling to the earth. I look at Charles. He shrugs and continues rifling through his lunch sack. He pulls out a can of guava juice, and tells me that room-temperature potato salad contains more bacteria than a week-old Petri dish. Charles is a biologist.

The sack lunches were packed this morning, but Charles is convinced the potato salad has gone bad. He says the cook made the salad yesterday. He then reminds me of the generator that turned off last night, as it did every night, around ten o’clock. No generator, no refrigerator.

Food goes bad here, so near the equator, and not always accidentally.

I didn’t intend to find masato. I was in high school when I read about this gastric nightmare. I could not, then, imagine ever wanting to try the stuff. Ever.

Masato is to the cassava tuber, what beer is to barley. Sort of. It’s popular throughout Amazonia. A recipe might read like this: dig up cassava; peel; bite; chew (don’t swallow, cassava is mildly toxic in the uncooked state); form a cassava-saliva bolus; spit this into a deep cast iron pot over the fire; repeat until cassava supply fails; add silt-laden river water and sugar or sweat potato; boil; cover and let ferment many days in the warm sun. Serve at ambient rainforest temperature.

A year later, I stood on the banks of the Amazon River. I had found a driver in Iquitos. Jorge León. Or he had found me. He was an up-and-coming tour guide and wanted to practice his guiding and wildlife interpretation skills on a real American. No charge.

I accepted, and on the back of Jorge’s motorcycle I visited the oxbow lake Quistacocha, a sawmill, and a dark and dusty museum.

After the tour, we ate lunch at a café in Iquitos. I thanked Jorge for his time and kindness. I offered to pay him for his guide services, but he refused. I told him the money was for fuel and upkeep. He accepted on behalf of his motorcycle.

On the sidewalk, in front of the café, Jorge paused for a moment, looking down the busy street. Motorcycles weaved between pedestrians. Cars pushed their way along the red dirt roadway; the drivers hung their heads out windows and yelled words I had learned in places other than Spanish text books.

He looked back at me and extended an invitation I had not anticipated: one to visit his relatives outside the city. The invitation appeared sincere, and I liked the idea of visiting family, of doing non-touristy things. Perhaps the morning had been a test, a prelude to this invitation, a time for Jorge to decide if I would appreciate and respect his family. I would. Very much. But I also knew invitations could be a formality, a gesture made with no intent of fulfilling the offer.

I told him I could see he was very busy, that I didn’t want to encumber him any longer, that he had already provided excellent services. He persisted.

A half hour out of Iquitos, a solitary cluster of stilt and thatched-roof houses came into view. A narrow pathway continued to the houses, but Jorge cut the motorcycle’s engine and said we would walk the remaining hundred yards. Without the breeze from the zooming motorcycle, I was again aware of the oppressive tropical heat and the suffocating humidity. I also became aware of a new set of sounds: no longer the drone of the city, the honking, the shouting, the exchange of shipyard commodities. Now my ears were tuned to the laughter of small children, the barking of wary dogs, and the thrumming of a million equatorial insects.

In the city, Jorge had shouted to me over the roar of his muffler-less motorcycle. But now his voice softened. He lifted the motorcycle’s long seat to reveal a hidden compartment. From this he retrieved a small package and a large butcher knife. We arrived quietly, almost reverently.

His own mother and father had diverged from this place a few weeks before he was born. But this clearing in the jungle was his genesis, his ancestral home. These were his kin, and here he moved with more grace than he had in the city. Here he became still, reserved, pensive.

A woman stood in the doorway, and with a down-turned flick of her hand, motioned for us to approach. Jorge raised an open hand. The woman disappeared into the house. This was his aunt. His father’s sister.

As we approached the house, Jorge explained that these were his relatives who had not moved to the city. He enunciated not as though they had accomplished some Herculean task by avoiding the city, by not surrendering to the gravity-like pull of electricity and running water, commerce and currency. He studied the houses and the path and the enormous wall of trees and lianas surrounding the clearing.

Closer to the house, Jorge removed his sandals and invited me to do the same. He said we would be more comfortable without them, that we didn’t need them here. I removed my sandals, and left them next to the trail.

As we approached the nearest house, Jorge’s aunt re-appeared with two bowls filled with a white liquid. Jorge put the package and knife under his arm, and then took the bowls from his aunt. He gave me one, looking into the bowl and then to me. I thought he might say something, but he only brought his own bowl to his lips, and drank deeply. When he had finished, he looked at me, expectant, hopeful, anxious.

I brought the bowl to my face, taking a furtive glance at the liquid: white, thin, opaque. I could have mistaken it for skim milk, but for the white fibers that swirled and clung to the sides. A pink sheen reflected my own face on the surface. Pink. The color of bacteria.

I held my breath and drank until I saw the bottom of the bowl. Only after I had exhaled did the taste come into my mouth: a hint of something gone very bad, something close to long-expired orange juice, maybe sour cream. It was warm. Masato.

She asked Jorge if I would like more. In that moment, when I hoped most not to insult or offend, I realized she was not speaking Spanish, but an aboriginal tongue, as was Jorge. He translated. I declined and thanked her for her generosity, for her kindness to a stranger.

She invited us to eat, and Jorge declined. He handed her the package and knife. Two small children, boys dressed only in underwear, appeared from the house: Jorge’s cousins, Cleeblan and Cheecago. I told them those were beautiful names and that they were beautiful children. Nombres lindos. Niños lindos. Jorge did not translate. Everyone laughed.

Others of Jorge’s family appeared in doorways or walked up from the river to greet us. Jorge went among his kin, embracing them one by one.

I stayed with Cleeblan and Cheecago. They spoke Spanish. I told them they were named after big cities. As big as Iquitos? they asked. Bigger. Their eyes grew wide, and they asked my name. Pablo. Me llamo Pablo. They asked if Pablo was also a big city. Not a city, I told them. Small. My name means small. They laughed uncontrollably. They took me by the hands and introduced me to their dogs.

In the late afternoon, Jorge and I left his forest family and returned to Iquitos, where we shared dinner with another relative. They served juanes, fist-size balls of rice and chicken, wrapped and boiled in a banana leaf. We ate the meal with beans and orange soda. The rice was soft, perfectly overcooked, and the chicken was greasy and flavorful. This was a new iteration of rice and beans for me. I had eaten these inseparable companions in every town I had passed through. I came to relish the starchy meal, even more than potatoes or pasta or bread. Rice and beans. I would never grow tired of this staple.

The potato salad is still falling. We are leaving the Osa Peninsula on our way back to San José, to the capital. For the last week we have been eating rice and beans, guava juice, and chicken. Every meal has included rice and beans. Breakfast. Lunch. Dinner. Rice and black beans. Every meal.

Except one. These are Virginians I have been traveling with, and a few days into the trip they revolted – a genuine coup d’frijoles. We were in the middle of the jungle and they demanded the beans stop. The camp cook’s shoulders sagged, his arms hung limp at his sides. He balked and the Virginians threatened to burn down the field kitchen. Then they laughed. The cook laughed too. Nervously. Then he retreated to the kitchen.

We heard drawers opening and closing, cupboard doors banging, cardboard boxes tearing, pans clanging. A few moments later, the cook appeared in the doorway with a package of spaghetti noodles and a can of tomato sauce. The Virginians accepted the offer and were made to understand the cook would keep looking for more spaghetti or something other than rice and beans.

That evening, as we sat around the long plank table, the Virginians watched the kitchen doorway. Earlier in the afternoon I had met the cook as he walked from the beach with a heavy burlap bag slung over his shoulder. He was caked with salt crust and black sand. He had grinned at me. A la cocina, he had said, indicating the bag.

When the cook came through the doorway, large casserole dish in hand, he stood tall, dignified, an accomplished maître d’. He set the dish on the table to cheers and applause. Pasta with marinara sauce.

The Virginians beamed at the familiar dish. But it was not so familiar. It was tuna fish marinara. The fish was strong, or had gone bad in the noonday heat. Someone gagged. I chased the first bite with a generous swig of guava juice. The cook stood at one corner of the table, waiting, smiling, ready to attend. I smiled back and, with unnatural gusto, took another bite.

I hoped no one would offend the cook. He refilled the pitcher with guava juice. No one said a word. After dinner one of the Virginians approached the cook, complemented him on the pasta, and politely asked if he could put rice and beans back on the menu.

Before our flight out of the jungle this morning, we had guava juice and scrambled eggs and black beans.

Now, as I watch this little cup of potato salad tumbling to the earth, I think of mashed potatoes. We could have had mashed potatoes. American mashed potatoes! I lose sight of the cup as it crashes through the forest canopy. My gaze turns to the larger forest, to the black-sand beach and breaking waves. I’ll survive without mashed potatoes. I’d rather have rice and beans.

One night, while swimming in the ocean, I discovered two sea turtles resting far below me. I dove toward them, and as I hovered thirty feet down, I heard something I had not known at the surface: the chatter of whales. This blog occurs thirty feet below the surface.